Maybe it’s just that time of year but I’ve been craving books, music, and podcasts of a supernatural variety. I’m in a spooky mood and I want to hang out with mad scientists, aliens from other planets, vat-grown monsters, and children of the night. I’m not sure how I ended up rediscovering it but the Welcome to Night Vale podcast hits the spot. 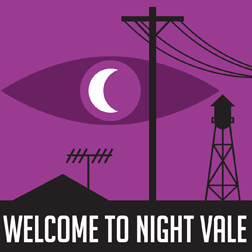 If you are unfamiliar with Night Vale, it is a strange place in the deserts of the American southwest. The podcast is a recording of the radio broadcast of one of its denizens. It features local news, PSAs, and special announcements. That would be pretty mundane in most places but not in Night Vale.

Night Vale is a nightmarish place inhabited by strange hooded figures, feral dogs, trans dimensional beings, and indescribable shapes that no one speaks of. The entire place is governed by a the town council and the sheriff’s secret police. The sky is patrolled by strange helicopters that vary in menace depending on what color they happen to be that day, that is when it’s not filled with strange glowing lights. Night Vale feels like a mashup of Twin Peaks, Hawkins, Indiana, and resort community designed by H.P. Lovecraft.

I first became aware of Night Vale back in 2012. I’ve been revisiting this strange place by replaying old episodes. I’m glad to see it survives after five years as an active podcast with many spin-off shows and books.

If you want a bit of black magic and mystery in your life, subscribe. I recommend it. See you at the dog park…or not.

Welcome Back to Night Vale