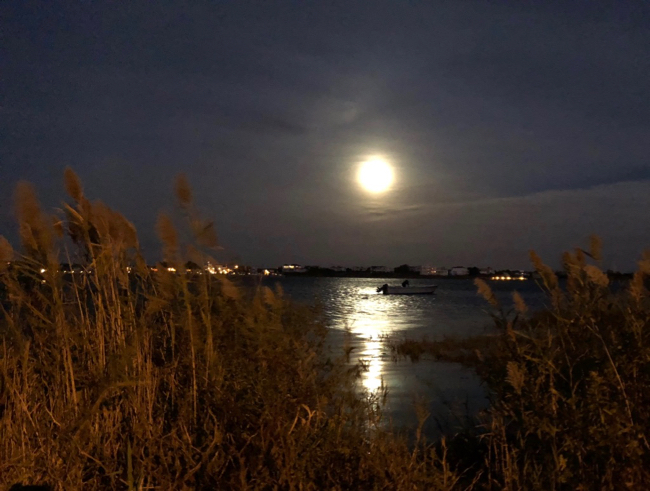 Taken pre-dawn with a bit of street lighting at my back and the moon in the sky. Full size original available here.

I can’t believe an entire year has passed since I upgraded to iPhone 7 plus. I love my iPhone and the plus form factor. My initial reason for going plus was to get the better camera features, it is after all my primary camera, but I found myself actually enjoying having the larger screen.
While the iPhone 7 plus was an improvement over my iPhone 6 plus in almost every way it wasn’t a big leap in technology. That big leap in technology arrived today in the form of the iPhone X.

The most remarkable moment unboxing the phone is when you see the screen for the first time. It’s amazing how much it reminds me of the iPhone 3g and 3 gs. The chrome band around the face, the rounded corners are really striking after staring at the 7 plus front face for over a year and previous generations for ten. 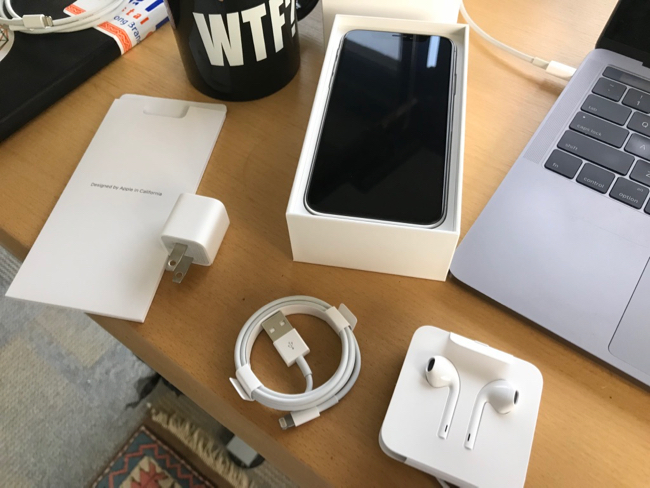 The lack of a home button also takes you aback. How are you going to unlock and work the damn thing? It brought the realization that I was going to have to learn a few gestures before I could even use this new phone.
Getting the phone out of the box revealed the usual iPhone accessories. The usual charging block, USB-Lightning cable, wired ear buds, and headphone jack dongle are all under the phone.

In anticipation of getting the X, I started off the day making an encrypted backup on my laptop. I want all my settings and health data restored on the new phone so an encrypted back is the only way to transfer them to the new phone. Prior to the backup iTunes reminded me to install iOS 11 which I did assuming the iPhone X would come pre-installed with it.
The new install process is very slick. Just put the phone next to another iOS device, enter your phone unlock pin, and the initial critical settings are transferred. The Face ID registration was very fast, probably less than a minute. Activation on the cellular network failed the first time but worked fine on the first retry. The last step asked me if I wanted to set the X up as a new phone or restore from iCloud or iTunes backup. I picked iTunes and connected the phone to my laptop. Then iTunes threw up a warning that my phone was running an older version of iOS and I would have to update the phone. (Airhorns)
The upgrade took agonizingly long. I was getting antsy. I tried not to freak out when I saw the estimated time start at 2 hours, drop to 40 minutes, and then start counting down at 20 minutes. The actual upgrade took around 30-40 minutes. When it was done, I was able to get the backup restored to the phone and I was in. Here are some quick notes on my experience.

After being in the “Plus Club” for so long this phone feels tiny in my hands. It feels small and as when holding other non-plus phones it should feel disappointing because of the non-plus screen size but not with this iPhone. The screen goes out to the edges. It looks so large in comparison to how it feels. It’s like the Tardis of iPhones.

This is the first device I own with True Tone and I don’t think I want another device without True Tone. The color of this display is stunning. There were some times when I felt like I was looking at a printed page. It’s like looking at a Retina display for the first time. You never want to look at a non-retina display ever again.

I thought I would hate it. It’s weird. I don’t hate it. But you stop noticing in in portrait mode. The same can not be said when you rotate the phone on it’s side. That black notch in my beautiful screen is very noticeable when you hold the phone in landscape. We are all going to need to get use to this new feature of our phones.

Face ID works great and works best when you don’t think about it. During my first few minutes with the phone I did have a couple of misfires. One because of the angle of my phone (almost pointed away from my face) and the other because I flubbed the unlock gesture. After two to three minutes you just get used to it. Everything gets smoother when you just start to expect that it works. The new unlock gesture is that easy to learn.
Later when I jumped in my car, Face ID worked fine with my sun glasses on and the phone at a low angle/position relative to my face. I thought for sure it wouldn’t work 100% of the time but sure enough it was reliable.

This phone is fast. It’s noticeably faster than my 7 plus.

Feelings After One Day

It’s not a minor incremental improvement. It’s a leap forward. It’s a blast to learn the new features, some so fundamental to the operation of the device.
Very happy with this phone. Glad I upgraded.